With the initial phase of development complete, Belle2VR has garnered interest around the world.  We’re happy to send the software to anyone that’s interested, and we plan to open source the entire thing soon!

Here are some folks in the High Energy Physics Group at the University of Hawaii Manoa trying it out:

Leo took a laptop and Oculus kit to the Belle II General Collaboration Meeting at the KEK laboratories in Japan and set it up in the lobby:

We hope to continue development and distribute this educational software as widely as possible!

The ICAT SEAD grant funding for the project BelleIIVR – Subatomic Particle Physics in VR, is coming to a close.  Over the last year, we successfully created a virtual reality visualization of the Belle II detector, and tested it in the Cube with physics students.  Now, we’re working to integrate the interactive visualization into the undergraduate nuclear & particle physics curriculum at Virginia Tech.  We made a video to describe the project and show off our new footage:

When BelleIIVR is used at Virginia Tech, we have the privilege of using the Cube as a lab for untethered, locomotive VR.  However, we would also love for people around the world to be able to learn and get excited about particle physics using this visualization.  So, we’ve created versions that can work just with the Oculus and a controller, or even just with mouse and keyboard at a computer.  Eventually, we may even release a version for mobile platforms.  Leo Piilonen will be taking an Oculus version of the simulation to the Belle II General Collaboration Meeting, for the Belle II team as a whole to see.  Besides becoming part of the curriculum at Tech, we’re also excited to apply for additional funding to continue building out the simulation and adding more features.

Yesterday was ICAT Day!  A lot of amazing projects at the nexus of science,  engineering, art, and design from around the university were exhibited.  Check out the Flickr photo roll here: 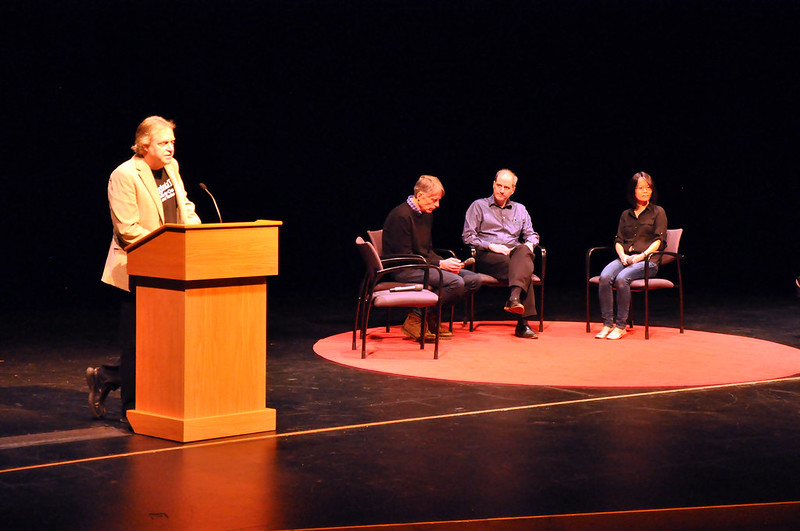 Also, some local news stations were there!  Here is their coverage:

Two of the major projects I’ve spent time on this year, VR Physics and Vauquois, were present at ICAT Day.  I will be posting more soon showing the outcomes of these projects as we finish wrapping up for the semester, but for now I will just post a couple of photos from ICAT Day.

When the Elumenati visited the Virginia Tech Science Festival earlier this year, they hired videographer Paul Anderson to make a promo video about the Cyclorama.  It looks amazing, check it out!

We’ve made a number of tweaks and user interface adjustments to this project, and it’s time to share them.

Additionally, the educational side of this project is really starting to kick into gear.  Instead of spending most of the meeting time talking about features for the simulation, we’re talking about lesson plan development, which is awesome!  That’s exactly where we want to be moving in to next semester.  We plan on piloting this thing with Society of Physics Students folks immediately following spring break!

This project just keeps getting cooler every week.

Come see it in person on the Cyclorama in the Cube, *this Saturday!*

Since the last update, we have:

We’ve been working extremely hard on the particle physics project.  A work-in-progress version of the simulation will be at the Science Festival!  Saturday, October 8th, 10am-3pm.  This simulation will be in the Cube.  Come check it out!

Before I dig into what we’ve been working on, insert obligatory pretty video:

The main to-do list we’d like to accomplish before the Science Festival:
1. Me – Get all the particle sprites for the different kinds of particles
2. Me – Color code the path lines in coordination with the particles
3. Me – Get the full Belle II detector model in, albeit combined and completely opaque.
4. Tanner – implement draft of sound (OSC communication of particle data is complete, so he can pick it up and make it sound awesome)
5. Topher, Jesse, Sam – Make a flyer for audience to pick up on their way in
6. Topher, Jesse, Sam – Make all the images for the particle sprites, so I have them to import (there’s around 120 different kinds of particles!)

We’ve had 3 team meetings now, which are extremely helpful now that we have a full team on board.  This includes:

Just in the past few weeks, Sam and Topher have picked up on the game very quickly and set out with Jesse to do a lot of work developing the educational aspect of the simulation.  In the next update I will go into more detail on that.

In the meantime, I’ve been working my butt off optimizing the simulation to keep a decent frame rate. There were 3 major bottle-necks.  I’ll detail them here, along with the solutions:

All that put together, and you can how smooth the above video is.  Not all the meshes from the Belle II detector are finished combining, so I just threw in the Electromagnetic Calorimeter for that video.  The framerate never dropped below 50FPS.  I’m pretty proud of that.

Oh, and I put Lucas Freeman’s (mostly complete) Cube model in the project too, so that vastly improves the aesthetic quality.

The particle physics simulation project is coming along quite nicely!  We have the vast majority of the Belle II model imported into Unity and looking good now.  There’s still plenty to work on, but check out how it looks as of right now:

Dr. Leo Piilonen has been extremely helpful in working to produce FBX files for the Belle II model rather than VRML files, and Jesse Barber, a physics undergraduate, has been working closely with me to get the model looking great.

Some of the things on my immediate to-do list:

We have some exciting updates from the particle physics simulation we’ve been working on for the past month!

First, we now have Unity scripts that read the particle data from a CSV file, sort it correctly, and use it to spawn and move particles.  It’s a very important first step – in fact, a lot of everything from this point on is frills.  Although there’s lots of frills.  But this is the *meat* of the project – taking particle data and visualizing it.  There’s a (slightly confusing to watch, but proof of product) video below:

ALSO, Jesse Barber (Physics sophomore) and Kaelum Hasler (high school student worker) have been working with me to get the VRML model of the Belle II organized.  We had to combine a lot of objects in order to get the object count down to something manageable (it was at something like 300k to begin with), but we also had to CUT a lot of the cylinders into four parts, in order to solve a transparency depth-sorting issue in Unity.  They spent almost all of last week working on that, and we now have a model in Unity!  This model is still incomplete because the VRML export that we’re working with doesn’t quite have the full model, but we’re almost there, and we can really see what it’s going to look like now when it’s all done!  See below for another video of that.

One of the new ICAT SEAD grants for 2016-2017 is a pedagogical particle physics simulation in the Cube.  One of the first steps, is to get the Belle II model working in Unity.  This is a bit of a task.

One of the PIs, Leo Piilonen from the VT Physics department, has to first export the model from an arcane format that the researchers (at KEK?) use, to a more readable format, like VRML.  VRML itself is an old open format that had some hype in the 90s but never really took off.  Thankfully, 3DS Max can import it, so I can organize and do any necessary edits to the meshes.  That’s also a task.  The meshes are all separated out into the smallest possible unit.  I’m not exactly sure at this point, but I think there might be somewhere around 500k.  3D modeling software can handle high polygon counts, but it’s not used to dealing with so many different objects.  So, I have to do some manual combination, etc, rename the materials so that they’re unique, etc.

Anyway, after some headache, we can import the meshes group by group into Unity.  I’ve only imported a small amount so far, just to make sure my pipeline works and to adjust as needed.  The next two issues will be